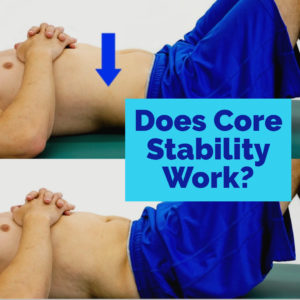 Core stability (CS) exercises have been popular since the 90’s to battle lower back pain (LBP), based on study by Hodges and Richardson(1996 & 1998).
Recent Research (1) has shown specific core stabilization exercises are not better than Yoga or Pilates or any other general exercises program.
But still many therapists, varies instructors and coaches continue to prescribe core exercises to solve lower back pain. So the question is: Does core stability work, or is it just a myth?

The problem for me personally with core stabilization exercises is how does the skill of learning to engage your core muscles in a supine position carry over to functional activities. Adding a foam pad or Bosu ball to these activities does still not make it a functional exercise.
Another problem is do we really need to strengthen these muscles? How active are these muscles during our daily activities, or during sports activities?
And Finally, no study to date has demonstrated that LBP is due to spinal instability. Despite a decade of research in this area it remains a theoretical model.

Lederman (2), re-examines core stability/spinal stabilization approaches and their efficacy within the wider knowledge of motor control, prevention of injury and rehabilitation. This series will cover different aspects of Core Stability training to see how it fits in with our practice 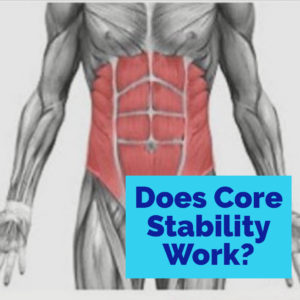 Transverses abdominis (TrA) and other abdominals.

The TrA receives most of the CS focus and is widely believed to be the main anterior component of trunk stabilization. We know that during pregnancy many of the muscles that are being trained with CS- Like the Transverses Abdominis (TrA) -are hugely insufficient, yet pregnancy is not listed as a common cause of LBP. While some pregnant women have back pain, most of it typically resolved within a week after delivery; well before the abdominal muscles have had a chance to recover.
So the correlation between LBP and abdominal muscle strength is not present during pregnancy. We also know that patients who undergo breast reconstruction, for which one side of the rectus Abdominis (RA) is used, do not have a higher degree of LBP. So if you can do without half of your RA, do we really need to strengthen it?

Research shows with rapid arm/leg movement, the TrA in Chronic Low Back Pain (CLBP) patients had delayed onset timing and therefore Hodges (3) in 2003 suggested that the Tra was mostly responsible for spinal stability. The real question is “is this delayed onset timing a dysfunctional pattern, or is it an movement strategy?” The differences were 1/50th of a second: no human can consciously control that and strength training is likely not altering that either. To overcome the timing problem, continuously contracting TrA is taught, but how functional is that? An efficient muscle can turn on and off, but should not have to contract constantly. No study to date demonstrates core stability exercise resets onset timing in CLBP patients

We are told it does, but does it?
How much do trunk muscles need to co-contract in order to stabilize the spine?…During standing trunk muscles, deep spinal erectors, psoas and quadratus lumborum are nearly silent! During bending, walking and lifting 30Lb the abdominal muscles operate at 2-5% of their maximum.So do we really need to strengthen them? And if we do want to gain strength, those muscles should be trained at 70% of their capacity and Core Stabilization exercises are not intense enough for that.

Do I use Core Stabilization exercises?

Yes, I do. Why? The core exercises are great for acute low back and help reduce pain and guarding. I dont tell my patients their spine is unstable and they need stabilization exercises. I rather tell them that we want to keep moving and reduce the perception of threat. Once they can tolerate these exercises we need to start exercising a little more intensely for it to be truly functional. It is all about context and the wording we use and the education we provide.

Do you have pain?